It has been claimed that the sentence in (a) can be said to describe a number of situations. For example, I could say (a) if I walked into Ernie's room and saw some tissue, cough syrup, and a get well ballon, as in the picture below. 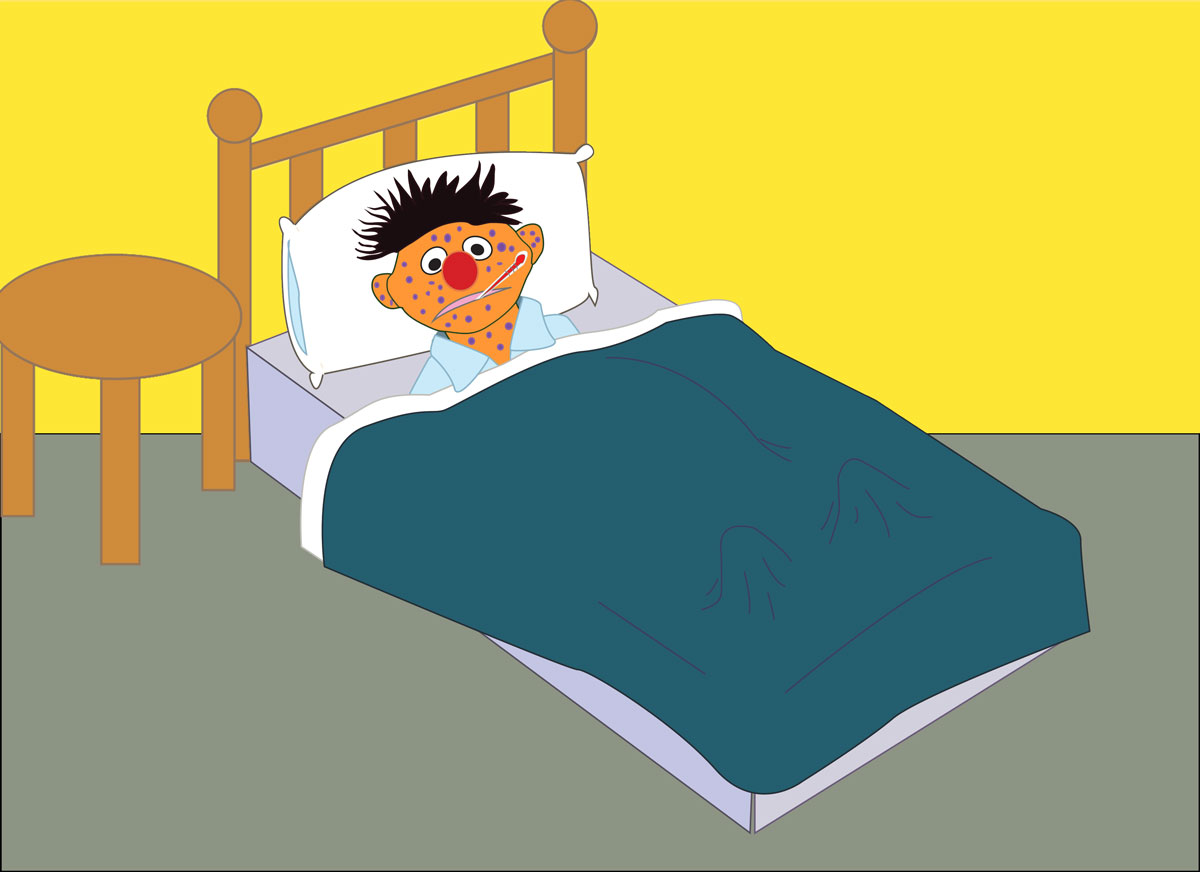 I could also say (a) if I had walked into Ernie's room and found him in bed with a thermometer and green spots all over his body, as in the picture below (let's pretend that that is how muppets look when they're sick).

But, interestingly, the use of (b) is more restricted: it can only be used when the speaker has actually seen Ernie, himself. That is, (b) is appropriate when I have seen the second picture, but not when I've only seen the first.

This pattern can be repeated for other “perception verbs” as well, such as smells, seems, tastes, feels, etc. My co-authors and I have confirmed experimentally that adult (English-)speakers have the judgments that I have described above for the sentences in (1). But we wondered: how and when do kids learn this? Clearly no one sits down their child and explicitly explains if you use a perception verb, you have to be able to see or have seen the subject of the sentence directly. If you've only seen indirect evidence leave him in the embedded clause and put “it” as the subject. You probably didn't even know about this pattern until reading this post. Likewise learning this pattern “implicitly” seems difficult as well. As a child, you'd need to pay attention to what kind of evidence mom or dad has for each of the sentences they say. So when do children learn this pattern?

To test this, my co-authors and I looked at a corpus of child speech (CHILDES database). We extracted each child's production of this structure and checked the surrounding conversation to see whether the subject (e.g., Ernie) was present or not. For example, if the child said the kitty looks like she's all curled up, we would look at the preceding discourse to see if the kitty was present during the conversation. We found that children begin to produce these structures around their second birthday. Starting at their earliest productions, children always obeyed the pattern discussed above (e.g., they would only use a sentence like (b) if Ernie himself was present). This shows that children as young as 2-years-old, can correlate the evidence they have with the correct form of copy-raising sentences! I bet you didn't guess that they learned this by two.

As you might imagine, very young children do not use these complex structures all that often (we only found about 70 instances). To corroborate these results, we wanted to probe children’s understanding of these sentences. We attempted to test if children could reject (b) sentences as descriptions of pictures in which Ernie wasn’t present (first picture). Notice that I say attempted. The children behaved the same on all conditions: they accepted a sentence like (1b) equally with both the pictures above. We found what many other authors have found when studying this type of data (evidentiality): a production/comprehension gap—children’s production seems to be far ahead of their performance on comprehension tasks. We argue, however, that children’s performance on the experiments does not reflect a true delay in comprehension, but is instead due to factors of the methodology. See this paper for more discussion of the methodological concerns on our study, as well as others.