How children learn the meaning of silence

Language is very efficient at times and there are cases in which we can leave something unsaid if it is recoverable from context. For example, there is stuff missing from (1), can you identify what it is and how it receives its meaning? When do you think kids know how to interpret this missing material?

The sentence in (1) receives an interpretation like the one below where the crossed-out material is left unsaid.

We can do this because is brushing Ben is recoverable from the first sentence. This type of leaving something unsaid is a sub-type of “ellipsis” called “sluicing”.

In joint work with Victoria Mateu and Nina Hyams, we explored when children are able to interpret this unspoken material. We designed an experiment that would allow us to test the full range of interpretations a child might assign for a sentence like the one in (1). For (English-) adult speakers, the sentence in (1) can only have an interpretation as in (2). The interpretations in (3) would never be allowed. (Although note that there are other languages that allow this.)

The silent material must be (strictly) identical to the previous sentence. There is a large amount of work on how exactly this identity condition should be formulated and languages seem to have slightly different identity conditions, but we will set that aside for now. 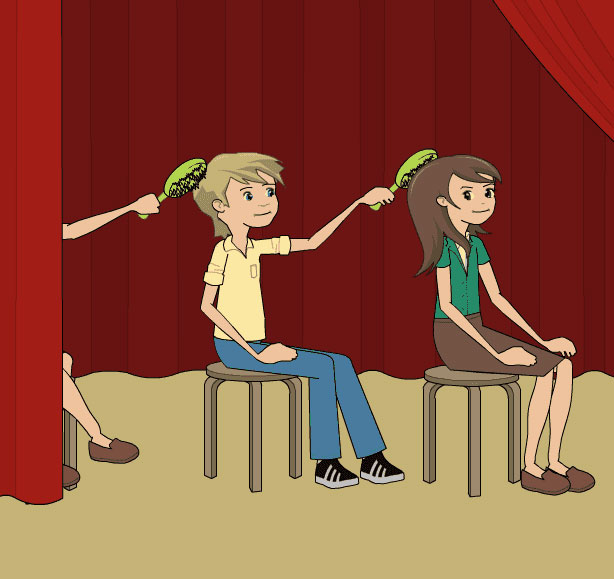 So, what do kids do? Overall, even the youngest children we tested (3-year-olds) interpret these sentences just like adults do! Even from the age of three children seem to know the English-specific identity condition on sluicing, and don't allow for sentences like (1) to have the interpretations in (3).

We also found that the children perform slightly better on sentences like (1) than ones like (4), and this difference is more pronounced the younger the child. Can you tell what the difference between these sentences are?

To understand why this is (so incredibly) interesting, we need to understand a bit of syntactic theory. It is a bit complicated, but I promise it is worth trying to follow along. In English, the "wh"-word (in this case who) always comes at the beginning of the sentence, regardless of where in the sentence it is actually interpreted. Take this sentence: Who do you think won the race? In this sentence the who is asking about the person winning, more like you think WHO won the race, and then the who is moved to the front. Try to figure out where the wh-words are interpreted in the sentences in (5). Notice the difference between the two? In (5a) the who is interpreted in the same position it actually occurs in, whereas in (5b) the who is far from where it is interpreted—after see. (This is a bit of an oversimplification, forgive me syntacticians.)

Now we can understand why children do better with the (a) sentences than the (b) sentences. This asymmetry had been attributed to what is called an “intervention effect” in the literature. In (5b) the who is asking about the object of seeing, but Big Bird intervenes between the who and the object position (after the verb). The idea is that the child has to hold who in their mind until they encounter the position it is interpreted in. In (5a) this position is encountered right after the child hears who. The subject position of saw is immediately before the verb (right where who occurs). But in (5b) the child must hold who in mind as well as Big Bird while they wait to get to the object position of see. The take away is that processing object questions (5b) seems to require a heavier computational load than subject questions (5a), and therefore small children—with limited computational resources—have more difficulty with object than subject questions.

What is relevant here is that young children show the same intervention effect for sluiced sentences—(4) and (6)—as they do for the simpler questions. This means that for (4), even though Ben is left unsaid, it still acts as an intervener between who and the object position. The children are sensitive to the structure of the unspoken material!

There is a debate in the theoretical literature about whether, for adults, the sluiced (unsaid portion) is actually projected and left unpronounced, or if its meaning is simply just recovered from the previous sentence. The fact that the children’s performance on sluices mirrors their behavior on fully pronounced questions (e.g., in (5)) provides evidence that sluices do in fact contain structures that have been projected. We don’t see this type of evidence in adults because their computational resources are sufficient enough to handle both structures—subject and object questions—equally well. This is a rare case in which acquisition data tells us something about the adult grammar. Thanks kids!