How to convey information about your reasoning

Inferences of will view the pdf

In my dissertation, I looked at sentences like those in (1). All three seem to convey that the neighbors are barbecuing, but can you figure out when would you use one instead of the other?

Also, notice that in (c) the future-tense marker will is used, but there is nothing “future” about this sentence.

The difference seems to lie in how you’ve concluded that the neighbors are barbecuing. To see this, we can consider the different situations in which you would or wouldn’t say each sentence. Consider the situation in the comic below.

Let's call the main character Lindsay. Lindsay has just seen first hand that her neighbors are barbecuing, and reported this to her friend using the sentence in (a). It would be rather odd if Lindsay had instead said the sentences in (b) or (c). The intuition is that by using the forms with must and will, Lindsay would have signaled that she did some reasoning to conclude that the neighbors are barbecuing, and as we can see in the first panel no reasoning was necessary in this case.

Must and will have analyzed as “epistemic modals” meaning that they mark that the claim (the neighbor’s barbecuing in this case) follows from the speaker's knowledge. This analysis makes the sentences in (b) and (c) both mean something like given everything I know, my neighbors are barbecuing, and thus are odd if the speaker has direct information.

But this can't be the whole story; there are also differences between must and will. Consider instead the comic below. 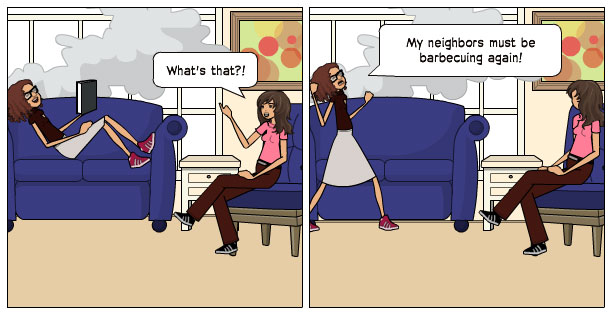 This time, Lindsay and her friend smell smoke entering through her window. Her claim with must is completely natural in this situation. But if she would have instead said the version with will, the sentence in (c), it would have been very odd. Let’s consider a final situation in the comic below.

In this situation, Lindsay does not smell or see the barbecuing. Instead, she bases her claim on what she knows about her neighbors' habits or plans—namely that they barbecue on Thursdays at this time. Her claim using will is completely natural in this situation.

In sum, Lindsay's use of the sentences in (1) all convey that her neighbors are barbecuing, but the difference between when she uses each one depends on what kind of evidence or reasoning she has used to conclude that. I find the sentence with will (c) especially interesting. It turns out that it is not an accident of English that the future-tense marker will can be used in the third comic, but not the first two. In fact, in many languages the same word (or morpheme) that is used to mark the future tense is also used in exactly the same situations that will is used. That is, the translation of (c) in many languages would show the same pattern just discussed—used when the speaker’s reasoning is based on a plan or predictable behavior, but not when based on direct observation or a result state, such as the smoky smell.

To explain this pattern, I claim that will (at least when it is used to describe things happening in the present) signals that the speaker has used a very specific type of inference pattern to reach her conclusion. While must and will both require that the speaker has done some type of inference (weird in the first comic with direct evidence of barbecuing), but unlike must it is incompatible with a specific type of inference: an abductive one. See the dissertation for a more complete argument that this is the relevant generalization to be made about will.

The dissertation also explores other puzzles about must and will. For example, in the context where I’ve smelled the smoke, I can say both the sentences in (2), but the version with will in (1) is bad. Why is (2b) good, but (1c) bad?

Another puzzle is that must and will seem to behave differently when negation is present. Can you spot the difference in interpretation between the sentences in (3)?

I will let you read the dissertation to see my answers to these puzzles.